If you are a parent, chances are that you have lived through several mammoth meltdowns (that’s the stage when your little darling morphs into a screaming, kicking, spitting ball of fury, like our Viggo in the book). In an ideal world, when your child blows up, you calmly and authoritatively ask him to take several deep breaths and then request that explain to you the issues which are bothering him and causing this almighty ruckus. After having his say – politely, of core – he will then listen to your side of the story and cooperates.  But have you ever tried reasoning – or even just pacifying – a child who has gone past the point of reason?

Exactly. You have more luck trying to calm a charging rhino down.

The reason for meltdowns is purely physiological.  The primitive part of the limbic system of the human brain is hardwired for flight-or-fight response, as per our evolutionary pathway.  A young child’s underdeveloped circuitry of the brain means that he or she gets short-circuited into this primitive  pathway at the slightest provocation (tiredness, hunger, discomfort). A child must thus learn to develop self-regulation, namely engaging higher emotions to bring the overheated system back into calm and peaceful waters again.

I have found, over the years, that strapping a child into his car seat helps a lot when it comes to dealing with tantrums.  My son would kick off spectacularly in public, and either his father or I would pick him up, carry him back to the car, strap him up in his car seat, drive round the block in silence (or sit in the stationary car) until he calmed down.

Being restrained relaxes the sensory system due to deep pressure  exerted on the proprioreceptors, as my physical therapist friend and the co-author of my yoga books, Teddi Barenholtz, told me. We developed a calming game that we teach parents and teachers called Sushi Roll. In this game, children get rolled up in yoga mats (if they are claustrophobic, they can keep their arms outside the roll) and then you chop them up … hard!  They absolutely love this game!

Based on the same principle, weighted blankets have been used as at-home therapy for both adults and children with anxiety, stress, insomnia, autism and other related disorders.

Blankets have always played a large role in our emotional wellbeing. Young babies are swaddled tightly in their early days to ease their transition from the safe and cosy womb into the big and scary world outside.

Here’s a charming little trailer for the heart-warming movie, Happiness Is A Warm Blanket, Charlie Brown:

How’s this cocoon for a child whose emotions are fraught and who is feeling delicate?  The combination of being secured and the swaying is relaxing and calming to the nervous system. 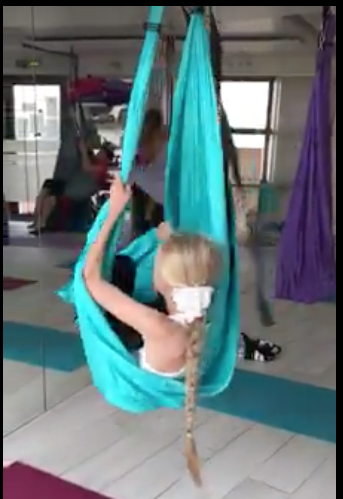 I love this unicorn blanket designed by Keri Palbicki who lives in Oconomowoc, Wisconsin. Keri is the mother of Lily and Mason. You can purchase the pattern for this blanket from Keri; please click on this link.

Keri said, “As of right now, I only sell the pattern (I could sell the actual blanket) but I have noticed that there are millions of crocheters out there and realized that people would rather have a family member or friend crochet this product for much cheaper than purchase from me because of the cost with the amount of time I need to put into making it.”

If you would like a unicorn blanket specially crocheted for you, please go to the contact form.  A child-sized unicorn blanket, made with baby yarn, costs £80, plus postage from the UK. It takes approximately two weeks to crochet, and each blanket purchased includes an automatic contribution to my campaign at Humanwire to buy blankets for refugees. Thank you.